Fingal Bay is a beautiful little bay, with probably the biggest drawcard the awesome spit connecting to Fingal Island

Fingal Bay has it's own surf club and cafe.  It is a nice safe beach but most people enjoy visiting Fingal Bay to cross the spit at low tide 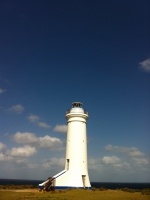 onto the island.  While there it is worth the effort to walk out to the Lighthouse.  Make sure you check the tides otherwise you may be stuck on the island over night.....

Surf lessons are also conducted at Fingal and some great fishing off the rocks.

« Back to activity overview