The idea for what was to become Samurai has its origins in the backpacking of Mark and Sandy in the early, mid and late 1980"s.  Samurai opened in November 1992 catering to a new market that had recently discovered Australia as being the end destination  of the largely UK./European youth following the early Lonely Planet guides through South- East Asia. "The Backpacker" ended up in OZ.  Nineteen years on the travellers are still active and adventurous and share a lot with the "pioneers", our first guests (except for the laptops, I things and apples you used to eat). This gives us at Samurai, as the original "dreamers" the opportunity to still be a traveller even at home.

Winner of numerous Tourism Awards, the first of many over 16 years ago , the latest, Samurai being inducted to The N.S.W.  North Coast Hall  of fame in 2011 for Backpackers  Accommodation after winning three years in a row. 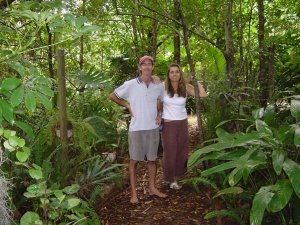